A GETAWAY WITH GAUDI IN BARCELONA

As published in The Jakarta Globe Newspaper: 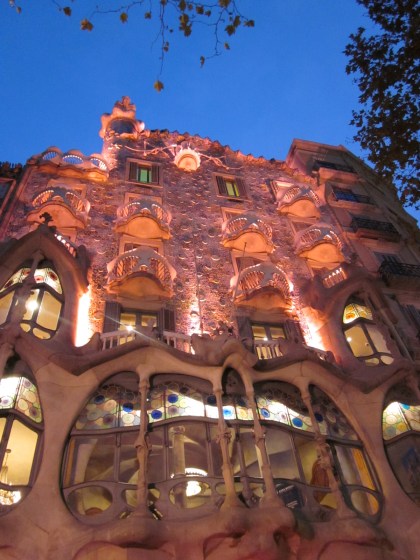 It was a particularly cold autumn night when my plane landed in Barcelona at El Prat Airport. Carrying my backpack, I dragged my weary feet to find a train, happy that the directions into the city seemed simple. I just had to get on the train and hop off at Passeig de Gracia, Barcelona’s main road.

Exhausted from my nonstop travels through Europe, I hadn’t done much research or planning for my stay in Barcelona. Still, because it’s such a popular tourist destination, I assumed I was in for an easy trip without too much thinking or rushing around. I had no idea that my tour through the capital of Catalonia would soon take an unexpected turn, revolving around the modernistic masterpieces of one of Spain’s most famous architects.

I followed a crowd of backpacking, touristy people off the train at a station that was luckily my stop. When I emerged at the top of the station’s stairs, I was greeted by a gusting wind. It wasn’t even midnight yet but the shops were closed and the road was empty. Only a few people strolled about in the streets.

I wasn’t expecting Barcelona to be so empty and quiet. In fact, I assumed Passeig de Gracia would be more like Khao San Road in Thailand, full of vitality and noise, and growing wilder as the night drew on.

Disoriented, I scrutinized my map. The directions were clear: Follow Passeig de Gracia to my hostel, building No. 33. I couldn’t wait to lay my tired body onto a proper bed and then begin my agenda for the next three days, which was simple: laze around on the beach. As it turns out, however, destiny has a mind of its own.

Rounding a corner, I was blinded by a purple light beaming down from a strange skull-shaped building that resembled nothing I had ever seen before, except maybe in animation and fiction.

The building’s facade sparkled with a mosaic of ceramic tiles that adorned its surface like glitter, and a few balconies loomed in front of the windows, shaped like skulls with grinning teeth and hollow eyes. The structure reminded me of the devilish countenance of Jack Skellington, the lanky protagonist from “The Nightmare Before Christmas.” Outlandish and strangely beautiful, it instantly captured my heart. I was mesmerized. 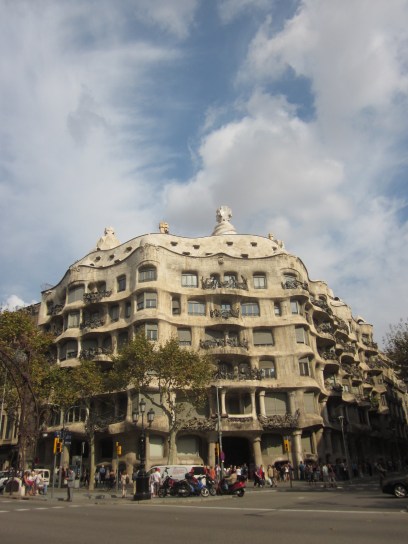 I saw a sign at the main door that read, “Casa Batllo,” a building designed by the architect Antoni Gaudi, and in that instant a new mission emerged for my time in Barcelona. I would stroll the streets and visit all of Gaudi’s creations, as if on a date with the genius architect.

It seemed meant to be; my hostel had organized a free Gaudi walking tour, so I went to the meeting point, Placa Reial, a square in the middle of the city. Once there, I met other architectural tourists and the blond history student who would be our tour leader.

He chose Placa Reial as a meeting point for a reason. Although Gaudi is known for his buildings, he actually began his career designing lampposts for Barcelona, and one of them is in this square.

Studying the lamp, I spotted several of Gaudi’s signature designs. An intricate iron snake twisted up to the top of the lamp, which was embellished with the winged helmet of Mercury, while an engraving of leaves was emblazoned on another of the lamp’s flanks. Because Gaudi suffered from poor health in his youth, including rheumatism, he is said to have spent hours alone, likely sitting outside and observing nature. He incorporated these natural elements in his designs.

From the lampposts of Placa Reial, our tour leader guided us along the famous street of La Rambla. Packed with tourists, La Rambla links countless tributaries and alleyways, where we found Gaudi’s Palau Guell mansion tucked away between a kebab shop and a mini-mart.

Designed for the Catalan industrial tycoon Eusebi Guell, Palau Guell demanded attention, drawing glances from almost all the pedestrians, no matter how focused they were on their route.

The building struck me like a medieval fortress, complete with an elaborate wrought-iron ornamentation at the front gate. Gaudi included a crest of Catalan in the gate’s spiral metal works, while other doors featured two entangled metal serpents carrying the Guell family initials.

The building is known for its husky features, but my favorite part was its the cartoon-like chimneys, which resembled lollipops with bright colors and playful designs that stretched high into the air.

After the Guell mansion I went back to my earliest Gaudi love, Casa Batllo, which caught my attention on the first night. Already so impressed with its outer facade, I decided to invest 15 euros, or almost $20, to venture inside. As in “Alice in Wonderland,” the door into Casa Batllo was my rabbit hole, drawing me into a journey through a surreal world.

Every millimeter of the building showcased Gaudi’s meticulous craftsmanship. The stair handle to the first floor was made almost 100 years ago from fine wood, ergonomically carved to follow the flow of the hand. The windows in each room were specifically placed to allow the most natural light inside. The main window repeated the shape of the skeletal mouth of a giant monster that inspired the building’s moniker, Casa Del Ossos, or the House of Bones.

Gaudi decorated the front pathway with ceramics. According to my audio guide, he initially ordered the tiny tiles for the interior, but when he saw them he decided the quality wasn’t good enough for his vision. Not wanting to waste the materials, he put them to use in the front pathway, pioneering an ethos of recycling that was not at all common back then.

Though I loved every room in Casa Batllo, my favorite detail was again the cartoon chimneys on top of the house, which incorporate the Catalonian legend of St. George. Gaudi placed a dragon on top of the building, which, according to the legend, was slaughtered by St. George before it could eat the town mayor’s daughter. The dragon’s spines line the top floor and lead to a chimney, which Gaudi designed like a sword to stab the dragon.

My last stop was Casa Mila, or La Pedrera, which Gaudi built for the wealthy Mila family after he finished Casa Batllo. Casa Mila is recognized today as a masterpiece in the architect’s portfolio, though back then it was a controversial blemish on his brilliant career. The house’s construction was halted several times due to permit issues with the municipality, while the building’s final design was judged to be too bizarre and vulgar, as some residents believed the structure resembled the sensual curve of woman.

But I adored Casa Mila. Its strange design looked like a squeezed tart or a replica of an ocean wave. Even the ceiling resembled the movement of beach sand.

Casa Mila also has another modern fan, none other than “Star Wars” creator George Lucas. In fact, rumor has it that the house’s ornamentation inspired Lucas to create the masks of the famous Stormtroopers and Darth Vader.

But Gaudi’s alluring design failed to satisfy the Mila family, whose public outrage led to legal action — and Gaudi’s depression and bankruptcy. The architect was eventually killed in 1926 when he was struck by a tram.

Despite Gaudi’s rough demise so many years ago, as I touched Casa Mila’s rock surface and thought about the architect’s story, I felt absorbed in his vision, his attraction to nature and the pride he had for his Catalonian roots. For me, Barcelona will always be synonymous with Gaudi.

As published in The Jakarta Globe Newspaper: http://jakartaglobe.beritasatu.com/archive/desert-dreaming-in-morocco/ As a lone female traveler, making my way...
13.11.16
Travel Articles

ON NUSA LEMBONGAN, PARADISE JUST A HALF-HOUR FROM BALI

As published in The Jakarta Globe:  http://jakartaglobe.beritasatu.com/features/on-nusa-lembongan-paradise-just-a-half-hour-from-bali/ While Bali is often referred to as the island...
13.11.16
Travel Articles

A GETAWAY WITH GAUDI IN BARCELONA

As published in The Jakarta Globe Newspaper: http://jakartaglobe.beritasatu.com/archive/a-getaway-with-gaudi-in-barcelona/ It was a particularly cold autumn night when...
13.11.16
Travel Articles